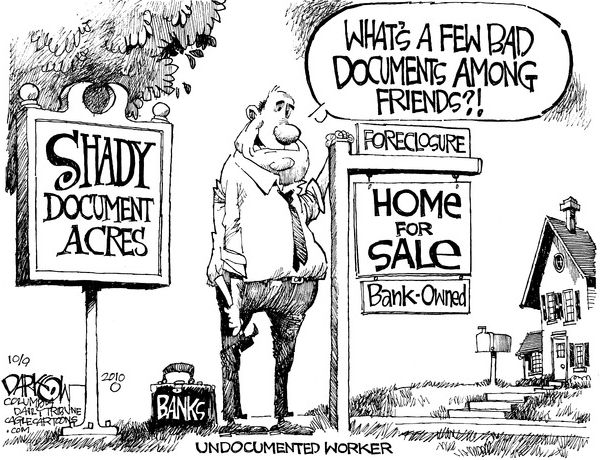 The Problem With No Documentation Foreclosure

Foreclosure is not funny, but the situation banks find themselves in when trying to foreclose is comical.  However, to the homeowner  the lack of documentation on the part of the bank means little protection from losing its right to foreclose.

In the State of Massachusetts, foreclosures don’t require judicial proceedings. What this mean is, no judge presides over the foreclosure. With the right paper work, notice, and auction proceedings, a homeowner can go from owner to squatter.

A homeowner must go on the offensive to prevent or slow down the foreclosure process.

The first warning many homeowners receive that the foreclosure process is about to commence is the bank’s attempt to comply with Servicemembers Civil Relief Act.

Under the Servicemembers Civil Relief Act, the property owned and mortgaged by military personnel prior to entering military service may not be foreclosed on while the mortgagor remains in military service, and for three months thereafter.

Massachusetts has implemented additional protections to ensure that creditors comply with the federal law. The law requires, a complaint is brought in the Land Court or Superior Court, an order of notice is published, served, and re-corded, and a judgment is issued by the court, after which the foreclosure may proceed.

If the foreclosing entity does not comply with the above mentioned steps they risk clouding the title of the property for the next twenty years.

Many homeowner are not members of the military. However, they may be able to use this law to stall the foreclosure process by challenging the bank’s standing to bring such action.

In HSBC Bank v. Jodi Matt (SJC-11101) The Supreme Judicial Court of Massachusetts is considering whether a mortgage servicer holding a securitized mortgage has standing to even begin a foreclosure action in the Land Court under the Servicemembers Civil Relief Act.

Arguments were heard this past September with a decision expected in the near future. The Real Estate Bar Association filed a brief supporting the position of the lender (read here). The brief of the attorney representing the homeowners can be read here.

In short: If the Court allows home owners to challenge the creditor’s standing while seeking compliance with the Servicemembers Civil Relief Act, it would change the foreclosure industry in Massachusetts. Essentially, the homeowner would be allowed to defend themselves without first having to go on the offense.