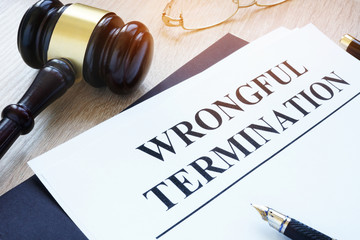 For anyone who feels they were wrongfully terminated from their job, the following case, involving a plaintiff’s claim that her employment was terminated because of her race, involves many different legal concepts and rulings. Because of that complexity, it can be highly instructive.

We’ve summarized the main proceedings of the case and provided a second section listing important employee takeaways from the rulings. If you’re in a position where you feel wrongfully terminated, or simply want to know your rights and precedents, read on.

Plaintiff Michele Dimanche, in her legal action, alleges that her supervisors at MBTA conspired to terminate her employment because of her race. Dimanche is a black woman of Haitian descent who worked as a motor person on the MBTA Green Line from 2000 until 2013. What caused Dimanche’s suspension and termination was an incident on January 25, 2013, involving a co-worker, another black Haitian woman. Both women claimed that the other was the instigator who yelled, spat, cursed and continued the fight form the office into the lobby.

The event was witnessed by many MBTA employees and the other woman reported the incident to a supervisor. Both women were suspended during the investigation of the affair. By the time of the altercation, Dimanche had already received four disciplinary warnings and a five-day suspension. MBTA’s regulations provided the possibility of termination for a fifth infraction. She was suspended for thirty days and then terminated. Dimanche insisted that the five previous disciplinary rulings were fabricated or distorted out of proportion.

Although the MBTA was correctly served on February 20, 2015, they failed to file a timely answer due to a clerical error. The district court entered a default for Dimanche (when a defendant fails to respond to a claim in the time set by law) on June 2, 2015. One week later, the MBTA filed a motion to set aside the default which was denied by the district court. On July 31, 2015, the MBTA refiled the motion to set aside the default and in September, the district court lifted the default over Dimanche’s objections. On February 10, 2016, Dimanche moved to clarify the scope of the sanctions. This was denied on February 26, 2016.

The trial began on October 17, 2016. Dimanche took the stand and produced two former co-workers and her psychiatrist as witnesse. The MBTA presented nine witnesses including three who witnessed the fight. Dimanche and her witnesses alleged that a couple of white inspectors referred to her as a “black bitch” and made fun of her Haitian accent. She claimed a supervisor refused to process her complaints. Although MBTA testified about its disciplinary policy, the altercation incident and the investigation, and the resulting decision to terminate Dimanche, they did not address her specific claims of racial harassment.

On October 20, 2016, the jury ruled in favor of Dimanche assessing MBTA for over $1.3 million in compensatory damages and $1.3 million in punitive damages. The MBTA appealed the decision based on three reasons: 1) there was insufficient evidence to support the jury verdict; 2) the district judge committed reversible error, and 3) the court lacked sufficient subject matter jurisdiction. Regarding reason #2, the MBTA claimed that the trial judge made two basic errors. One was that he imposed a very severe punitive sanction as the price for removing MBTA’s accidental default. The other was that the hostile work environment charge was only added on the last day of the trial. Regarding reason #3, the MBTA brought up the court’s decision in the Buntin case which held that “a plaintiff may not bring claims for damages under 42 U.S.C. § 1981 against state actors, including defendants sued in their official capacities as government officials.”

The Court of Appeals affirmed the district court’s ruling. The asserted that MBTA did not make the appropriate objections and offers of proof. The Court of Appeals did agree that the trial judge committed an error in imposing the default sanction order. However, they did not agree with MBTA’s claim that the trial judge was prejudiced by either the default sanction order or the late hostile work environment charge. They also waived MBTA’s argument on the Buntin case regarding no plaintiff claims for damages for state actors and officials.

For those employees who feel they were wrongfully terminated or who feel that an unfair termination is a risk, this case provides some valuable lessons.

There is no question that employers can be unfair in their dealings with employees. History is rife with examples of employer unfair treatment, discrimination, and harassment. However, this does not mean that you are powerless in these situations. What can help you is your knowledge of company policy, legal issues involved in wrongful termination cases, your following of due process with any complaints, and your accurate documentation of events?

Got a question? Call us, we can help.